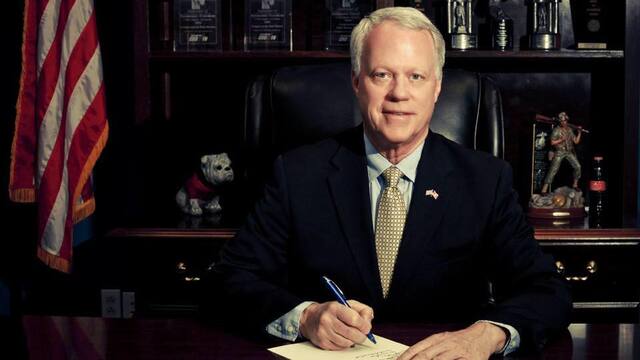 ATHENS, GA - Dr. Paul Broun, M.D., a U.S. House candidate for Georgia’s Tenth Congressional District, announced Tuesday that he will work to expand access to alternative COVID treatment options in light of recent reports out of Hancock County, which has the highest COVID death rate in Georgia.

“What we are seeing in Hancock County,” Broun said of the area he previously represented in Congress, “is a preventable tragedy. Big government is colluding with big pharma to block affordable medicines that work.”

Hancock County is one of only three localities in the nation that has lost one out of every 100 residents to what Broun calls “the Chinese Wuhan Virus.”
The poorest county in Georgia, Hancock County has a population of fewer than 10,000 residents—70% of which are African American—and is located in the southeastern portion of the Tenth Congressional District.

“There is a sinister confluence of factors complicating the situation in Hancock County,” Broun continued. “Arrogant power-freaks like Fauci have blocked inexpensive life-saving treatments like Hydroxychloroquine and Ivermectin, costing hundreds of thousands of lives, to line the pockets of their Big Pharma overlords and protect insurance companies.”

“This violates the most basic medical ethics,” Broun said, “and once re-elected, I will call on Congress to immediately remove barriers between physicians and patients and expand access to other affordable and effective treatment options for some of our most vulnerable citizens right here in rural Georgia.”

Broun is a UGA graduate and physician with over 40 years of medical experience. As a congressman in 2012, he deployed to Afghanistan as a medical officer in the Naval Reserve, treating ill and injured soldiers and Marines.

If elected, Broun would return to Congress with 7½ years of seniority, which would give him priority to become the highest-ranking Republican on the Science, Space, and Technology Committee’s Subcommittee on Oversight and Investigations. Broun chaired this subcommittee in his previous time in Congress when Republicans still held the majority.

“As an actual scientist myself,” Broun argues, “I’m the only candidate who is qualified, or who would have the seniority, to immediately launch an investigation into why the deep state public health bureaucracy is purposefully holding back affordable medicines that work from our poorest COVID patients.”

“The American people deserve to know the truth about Fauci, the NIH, CDC, and FDA” Broun said. “I’ll investigate them and make referrals for criminal prosecution where appropriate.”

Broun continued, “As a majority-minority area in rural Georgia, Hancock County is a unique case study. With a vaccination rate under 50%, the citizens of Hancock naturally mistrust mandates because the U.S. government has a long and sordid history of mistreating African Americans—look no further than the Tuskegee experiments, for example. They are rightfully skeptical of tyrannical public health bureaucrats who call for vaccine mandates while rejecting affordable, life-saving treatments once the vaccines fail to prevent infection.”

“The left likes to talk about ‘trusting the science,’ but the powers-that-be in Washington are intentionally withholding medicine that works,” Broun said, “because they want to keep spreading fear and creating more government dependency. For them, it’s all about power and money, all at the cost of our civil liberties and fundamental human dignity.”

Read our latest news on any of these social networks!

We will send you breaking news right to your inbox